Although Detroit has been experiencing population loss since 1950, it hasn't been occurring at the same rate each decade, and some neighbourhoods have lost more population since 1950 than others. However, it's actually even more complicated than that, so in this post I'm hoping to show some of the more detailed trends by showing maps of census tract level population change by decade, starting with the 1940s: 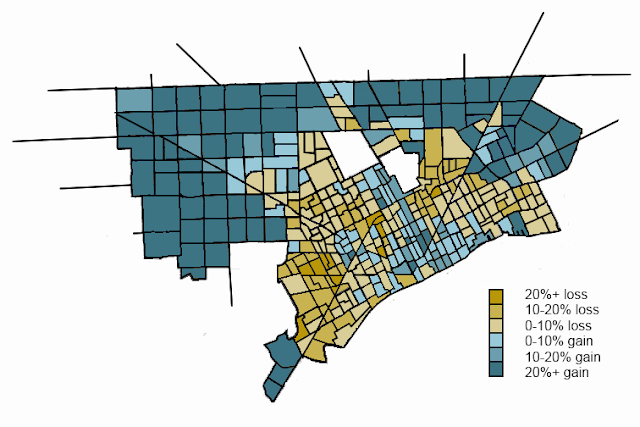 The legend is the same as from the New York Times maps. The outlying areas were still experiencing significant population growth in the 40s, while inner neighbourhoods were more mixed. I suspect a lot of the trends in the inner neighbourhoods had to do with changes in household sizes (increasing in some areas, decreasing in others). Mapping changes in occupied households is something I'm hoping to look into with a later post. 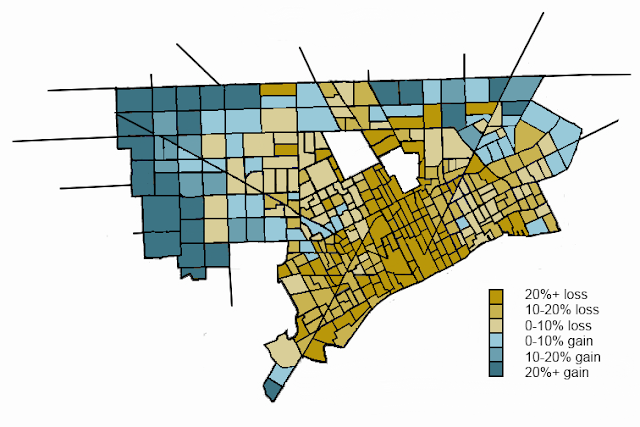 The core was predominantly losing population while outlying neighbourhoods were still growing. Some census tract boundaries changed between certain decades, in which case I combined adjacent census tracts to get a census tract group where the boundaries matched (you see that a bit in the inner core on the 1950s map). 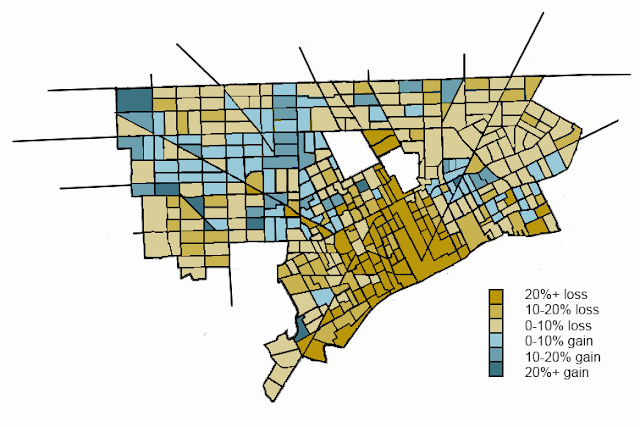 1960s. Growth at the outskirts continues to slow or even stop, the core continues to lose population at a similar rate, but you also see a few neighbourhoods that go from losing to gaining population, like around Van Dyke and Harper and Livernois and 5/6 Mile. If you look at my earlier maps of changes in racial demographics in Detroit you'll see that this population growth was occurring in areas experiencing rapid white flight.

If you think about it, that's not as strange as it initially seems. Black household sizes were probably larger than white household sizes at the time, so as long as the number of occupied housing units stayed more or less stable, population growth could occur. This suggests white flight had a more indirect effect on population decline in neighbourhoods.

I suspect what happened was that as a result of whites suddenly leaving neighbourhoods, the large supply of housing available caused prices to drop, encouraging blacks to move from older ghettos into these newer homes. Due to the difficulty of getting loans due to problems like redlining, or just because the oversupply of housing meant housing costs were low and it wasn't worthwhile investing in homes in ghettos, homes in the ghettos weren't as well maintained or at least not updated to modern standards. It seems like rather than white flight leading to immediate population loss in the newly forming ghettos, it lead to population loss in the aging ghettos closer to the core as blacks fled the aging ghettos (ie areas with 20%+ losses on the Detroit map) for the homes freed up by white flight.

Does a similar pattern hold in the 70s? 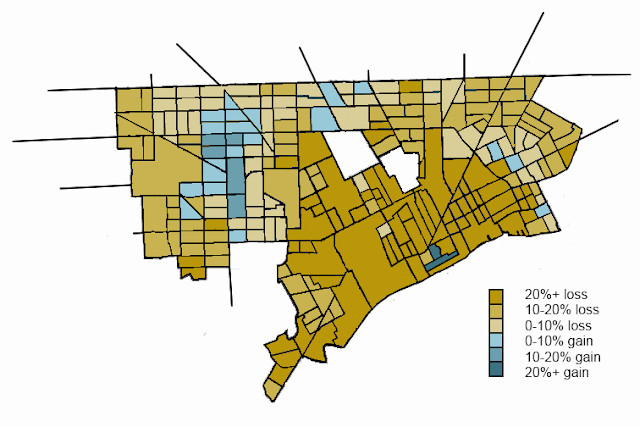 You also see the areas of intense population loss expand significantly from essentially the area inside Grand Boulevard in the 60s to most of the area bounded by Conner/6 Mile/Livernois. 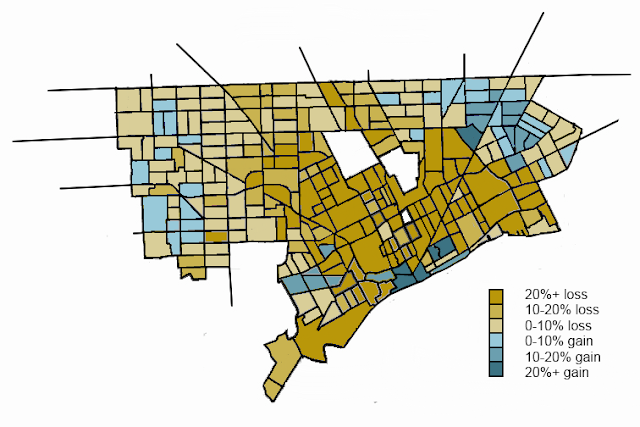 The situation seems to stabilize a bit in a way, and there's more areas of growth in and around downtown. 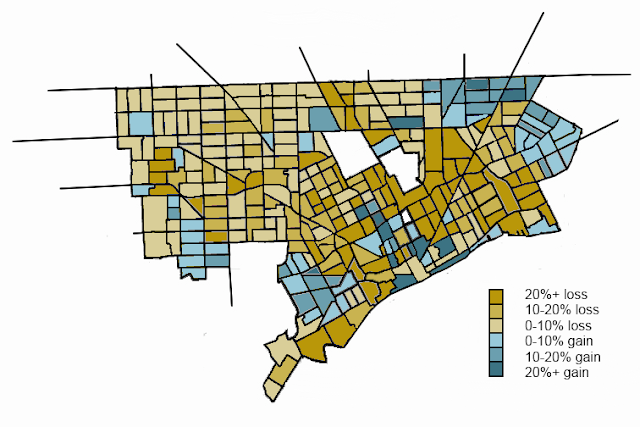 Downtown is starting to look more stable if not growing, and other inner core neighbourhoods start to experience lower rates of population loss than in the 80s. Outside downtown, the growth in Warrendale and the northeast of the city is again tied to rapid changes from white to black, and in the west side neighbourhoods near Michigan Avenue, it's tied to rapid changes from white to Hispanic.

Finally there's the 2000s map that many have probably already seen if you've look at the New York Times maps. Rates of population loss increase in most of the outlying neighbourhoods with just a few census tracts, mostly in/near downtown experiencing population growth. 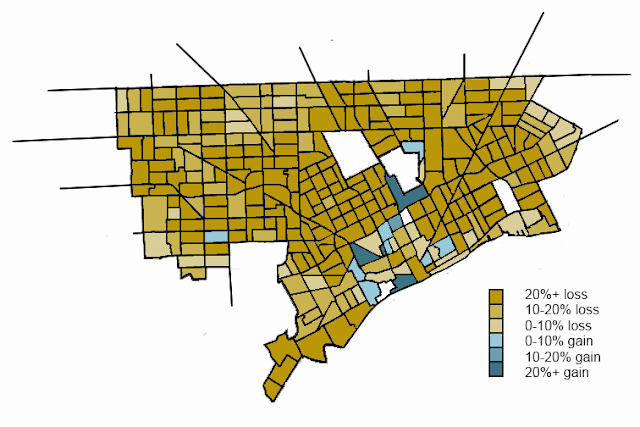