The first two posts in this series looked at how US MSAs grew relative to distance from city hall.

In this post I'll address the shortcomings of using distance from city hall by using a different definition of urban cores based on census tracts that had 1960 population densities of 5000 people per square mile (pop/sq mi) or more (details are a bit more complicated, see end of post). Ideally, I would've based it on 1950 or even 1940 densities, but there are too many places for which census tract data only exists from 1960 onwards. Besides, census tracts with >5000 pop/sq mi densities are unlikely to have experienced greenfield development between 2000-2010. 5000 pop/sq mi is typical suburban densities, if those tracts weren't already built out by 1960, they probably were soon after. Also, 1950s development, while not quite as urban as pre-WWII development, typically still has some urban elements like locally oriented retail and relatively well connected streets.

By this measure, some MSAs have very big urban cores, like New York, while new metros like Orlando and Las Vegas have very small ones. It might be surprising to see Los Angeles with such a big urban core given its suburban reputation. However, while Los Angeles was a tiny town in the days of urban rowhouse and mid-rise development, development had already spread out across much of the LA Basin and San Fernando and San Gabriel valleys by 1960. This development was largely in the form of semi-urban streetcar suburbs and "pre-interstate suburbia". The development barriers created by the surrounding mountain ranges caused outwards growth to slow soon after 1960 and the urban area to densify - even if the density took a different shape than in 19th century America.

There's also a few more cities like Phoenix and Sacramento added to the list of cities that have "hidden" population loss in the urban core by having city limits that include substantial greenfield development. I was a little surprised to see Denver also lose population in its urban core, since it's relatively well known for New Urbanist and infill developments. However, looking more closely, it seems most of the City of Denver's population growth has taken place in suburban style development like Green Valley Ranch, or redevelopment of large non-residential sites like Stapleton Airport or Lowry Airforce Base. The downtown growth, while significant, was not enough to offset population losses elsewhere in the urban core (presumably mostly tied to household size declines).

These numbers also suggest any attempt to simplify the fate of urban cores as being tied to climate or metro-level growth rates is clearly simplistic since the above table shows the correlation with either of those factors is weak. Many of the sunbelt sprawlers are seeing little to no growth or even population loss in the urban cores. The urban cores that are growing the most are essentially the cities you'd expect and include many slow-growth metro areas in the North-East (though usually with constraints to suburban growth).

Here are some maps of the top 10 MSAs. 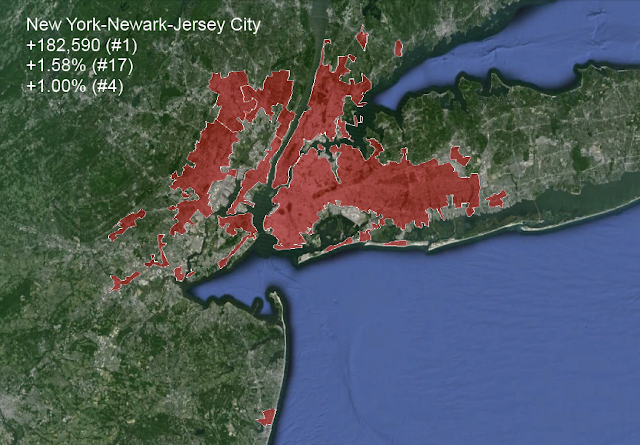 The same format will be used for the other top 10 MSAs. 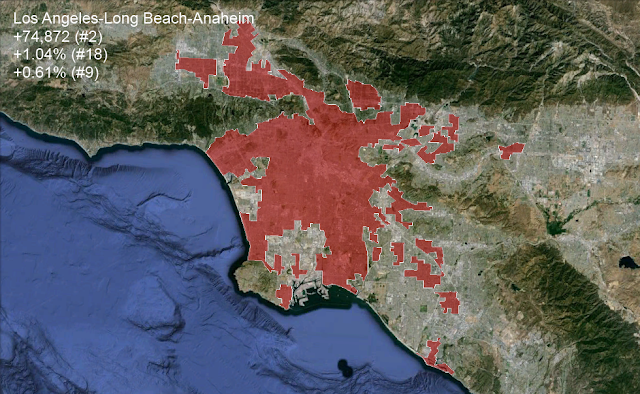 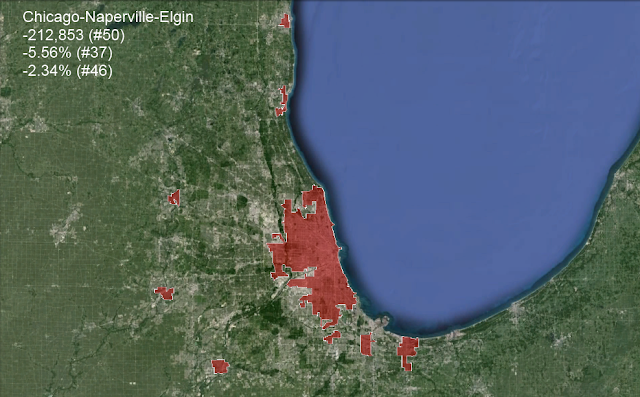 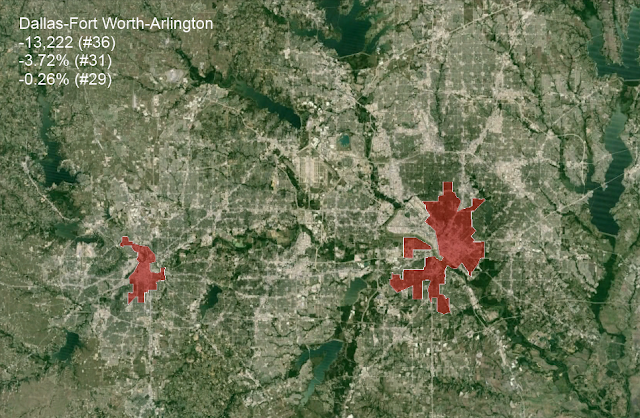 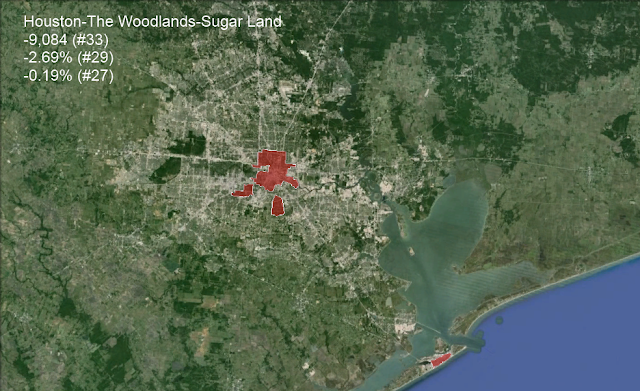 In Houston most of the population loss was actually in Galveston rather than in the primary core, possibly tied to damages from Hurricane Ike. 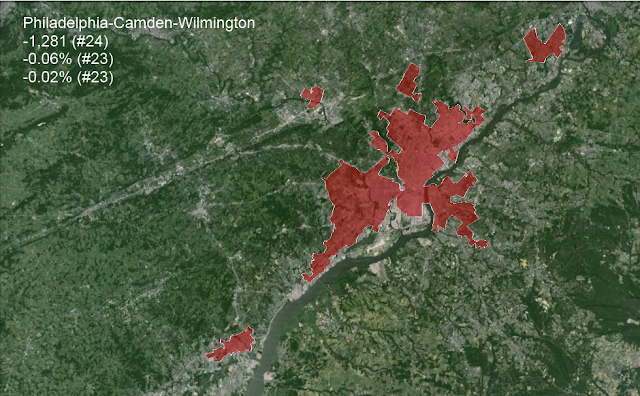 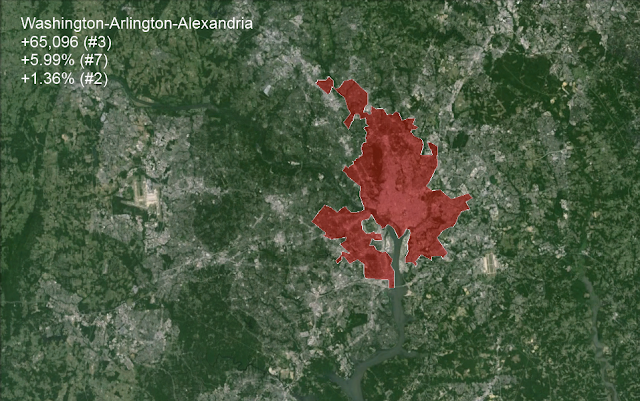 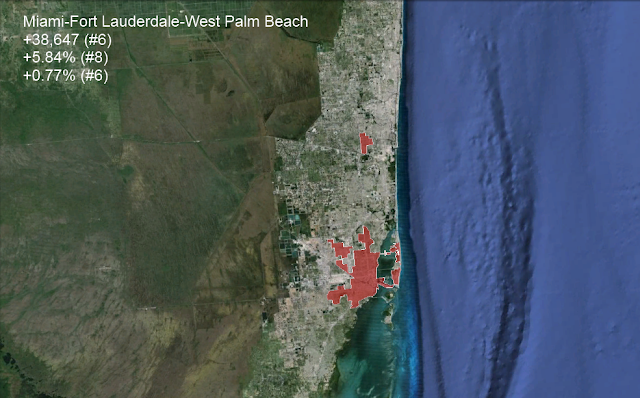 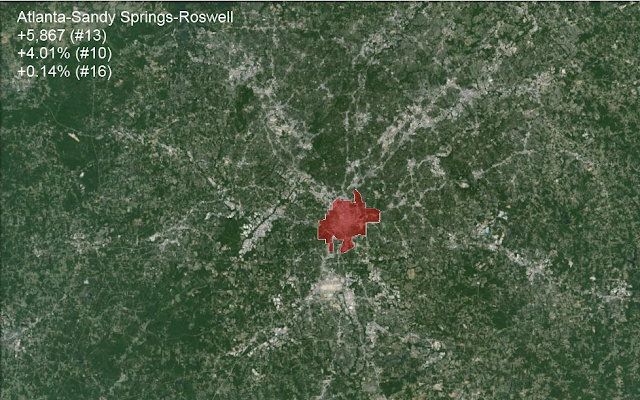 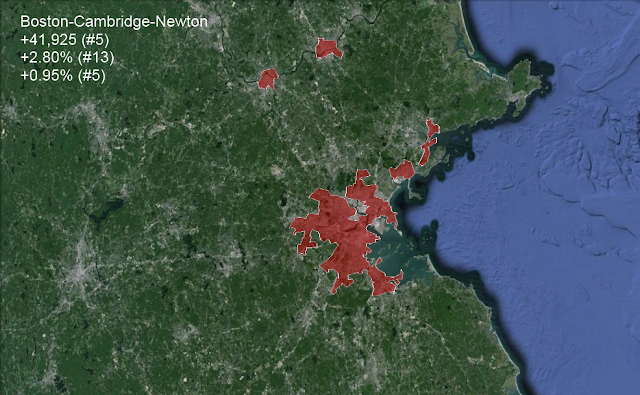 The primary city's downtown, defined as the business district with the highest walk score, must always be included in the urban core. The primary city is the one that's named first in the official metropolitan area name (so Virginia Beach for the Virginia Beach-Norfolk-Newport News MSA).

For example, Tacoma's downtown is largely commercial, and was already that way in 1960, so it did not meet the density requirements. However, adjacent neighbourhoods formed a contiguous area of census tracts with >5000 pop/sq mi 1960 densities with a population of over 25,000 in 2010, and the MSA name is Seattle-Tacoma-Bellevue, so downtown Tacoma is included. This is not as arbitrary as it sounds, the cities that make it into the MSA name must meet certain criteria of total population and employment.

Any census tracts with a 2010 density of over 15,000 pop/sq mi contiguous with primary or secondary urban cores are also included.
Posted by NickD at 01:02