Where do the cars in Toronto come from? Part 2

In the previous blog post we looked at how much of the commuters driving from downtown are not from the 905, and in fact, residents from the 905 take transit at a comparable rate to Toronto commuters to get to downtown jobs.

However, there's more to the story than just who drives to downtown for work. This blog post will look at the design and location of suburban job centres, how it encourages driving, including from downtown reverse commuters, and non-work auto trips to and from downtown.

Although the auto-mode share for downtown to downtown commutes is only 7%, based off the 2011 National Household Survey census tract profiles, and data presented in the Toronto Star article used in the previous blog post, auto mode share for downtown residents commuting to jobs outside downtown is about 46%. This makes for over 28,000 downtown residents driving to work, more than the number of people driving to downtown jobs from the entirety of the 905, and the vast majority of that is from reverse commuting.

If 2011 travel patterns are similar to those of 2006, it's probably safe to say that most of those drivers are commuting to jobs in the suburban GTA, rather than downtown adjacent areas like Riverdale and Little Italy.
This suggests that traveling from the suburbs to downtown, where most take transit is much more practical than the reverse where most seem to drive. Cars are largely unnecessary aside from reverse commuting, and the high cost of condo parking spots should negate any small advantage in congestion levels from reverse commuting.

There are several reasons why reverse commuting by transit might be impractical. GO transit to the outer suburbs is much more limited in the reverse peak direction. In addition, many suburban GO transit users will drive to the train (or bus) station and use park and ride lots due to the low quality suburban transit service for the "first mile" between their homes and the train station. This means even where two way GO transit does exist, reverse peak commuters can't take their cars with them on the train to use for the "last mile" between the train station and their workplace.

Suburban housing is also often easier to serve by transit than employment. Much of the suburban bus routes run on arterial roads, which are often lined with denser more affordable housing, which means residents, especially the residents that are least likely to own cars and therefore most likely to take transit, are clustered around bus routes. Even lower density housing is often within reach of these bus routes. This is good for getting suburbanites to take transit downtown, but for getting people to jobs in the suburbs, what matters is the location of jobs relative to transit.
So where do the jobs cluster? As discussed on urbankchoze, suburban highways tend to attract retail and employment uses looking to maximize their catchment area of customers and potential employees, and aren't as bothered by the noise and visual impacts like residents would be.

Within Toronto, regional malls often locate next to highways, but the smaller shopping plazas, the type anchored by grocery stores will also locate at arterial road intersections. These shopping plazas tend to have smaller catchment areas - people don't want to drive more than 10 minutes for basic retail needs - and Toronto doesn't have that many highways

On the other hand, most people would still consider 30 minutes a reasonable commute, which makes it feasible and desirable for employers to locate virtually all major employment near highways. This map posted on Amalgamated shows most suburban office space is near highways, especially the 401 in Mississauga and the DVP/404. While I'm not sure how many downtown residents work in industrial parks, those are also located along highways.

Obviously being next to highway interchanges will make driving very convenient, leading to sprawling office campuses with gigantic parking lots separating them from the street, a model that significantly disadvantages pedestrians and transit users.

There's also the fact that employment nodes that straddle a highway can be rather impractical to serve by transit since transit can't go on the highway and there are limited points for crossing the highway. One of the most egregious example in the GTA is probably the office and industrial cluster in Oakville, along QEW (403) frontage roads. Due to lack in diversity of uses, low density and near-zero connectivity to adjacent areas, Oakville Transit serves this area with a rush-hour only one way bus loop. This means you might have to sit on the bus as it passes your workplace on the wrong side of the highway before coming back on the right side in the other direction, or make the long walk across the highway and in pedestrian hostile environments. 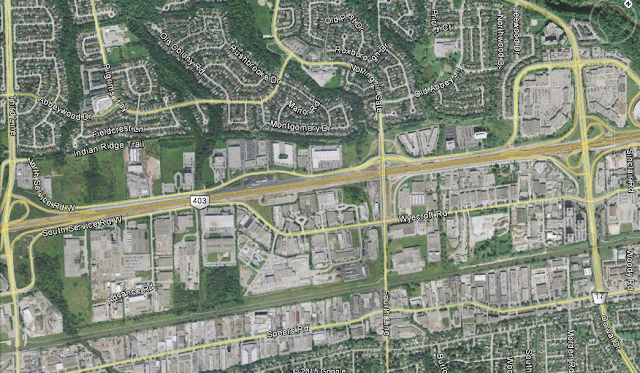 There are office parks with somewhat better street connectivity, but many of the suburban industrial parks similarly straddle highways, resulting in a disconnected street network. Many industrial parks also contain commercial uses including office clusters, so much of the office and industrial employment is in large employment zones with few off peak uses. This makes it impractical for the transit agency to run reasonably good bus service. Single use residential is not as bad and can still spread out transit demand throughout the day since residents will leave home for work, shopping, school, entertainment and other destinations at various times.

The auto-oriented nature of suburban jobs is likely a major factor in the rate of car ownership among downtown residents. About half of downtown car owners drive to work, and probably many others own a car because they used to work outside downtown and may have to do so again in the future. Many downtown residents are young people who live there for the lifestyle, and to be close to the region's most significant concentration of good jobs and economic opportunities, but they may still have to commute to locations outside downtown at some points in their careers.


Making it easier for downtown residents to go car-free is important due to the high cost of underground parking. Requiring a lot parking for new development is also a major obstacle for small scale intensification, since lots are too small to fit underground parking ramps. Facilitating development in the core by reducing parking needs is important because of the low per capita transportation needs. We always hear about the need for investing in transportation infrastructure, but it's also clear that paying for all the projects on peoples' wish lists will be very difficult, so it's important that infrastructure is used efficiently.

It's also important to reduce the need for using cars downtown because auto capacity of downtown roads is limited compared to current demand, and yet at the same time, a lot of space downtown is dedicated to cars. Having lower auto-mode share, even lower than it currently is, will make it politically easier to transfer car space to pedestrians, transit and bikes, which also need more space downtown, and can use the space more efficiently than cars.

Fortunately, it seems like office space construction is shifting back towards the core. Although the urban core contains about half of the GTA's total office space, it is home to about 70% of office space under construction. Hopefully suburban office construction begins to shift towards more mixed use transit nodes, such as the Urban Growth Centres, although it's unclear to what extent this is happening. Many of these growth centres haven't had a major office development in over a decade, while development continues along the 401 and QEW.

Most of this post focused on commuting, but what about non-commute trips? Those are also very significant, and auto-mode share for those is higher. While there are 28,000 downtown residents commute to work by car, Transportation Tomorrow Survey (2011) results suggest there are are comparable or slightly greater number of non-work auto trips made by downtown residents. For trips made by all GTA residents to or from downtown, non-work auto trips also outnumber auto commute trips.
Posted by NickD at 15:55