This is the 3rd post in a series on rapid changes in race/ethnicity.

The first two compared Detroit to Houston, with the first post mapping where the changes occurred, and the second post putting some specific numbers on how much things changed.

For this blog,  I'll be focusing on how current changes in metro Detroit compare to earlier decades.

I've defined "rapid" as a change of more than 20 percentage points, and focused only on situations where the white population decreased and visible minorities decreased. 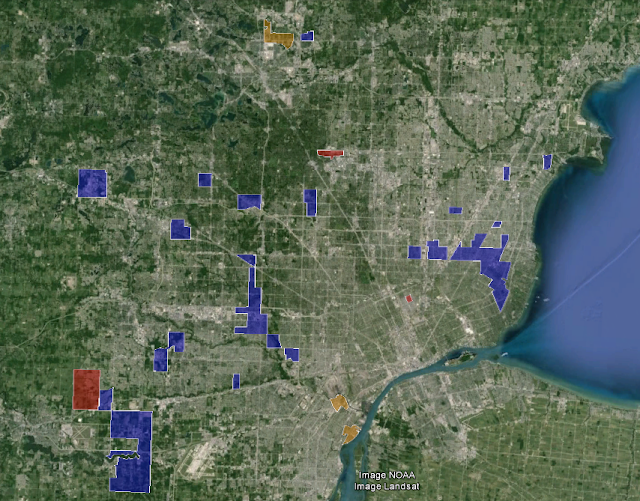 Regarding the 90s, in the 2000 census, a new category seems to have been created - "2 races or more", so it sounds like for the 1990 census and earlier, mixed race people had to pick a race. I decided to assume that these people would have chosen a race other than white in the 1990 census (I know, not perfect, but what else can I do?). As a result, in some places the fastest growing "minority group" was "2 races or more" which is shown in green. 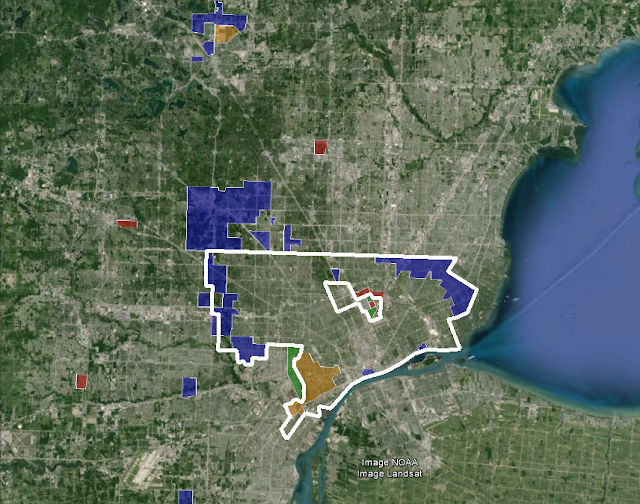 It looks like the changes in Southfield were happening faster in the 90s than in the 00s. Also, aside from Southfield, Hamtramck and Pontiac, these rapid racial changes were mostly occurring in Detroit's outer neighbourhoods, including a substantial Hispanic influx to SW Detroit that seems to have slowed in the 00s. In the 00s, the changes mostly occurred in census tracts in inner suburbs. 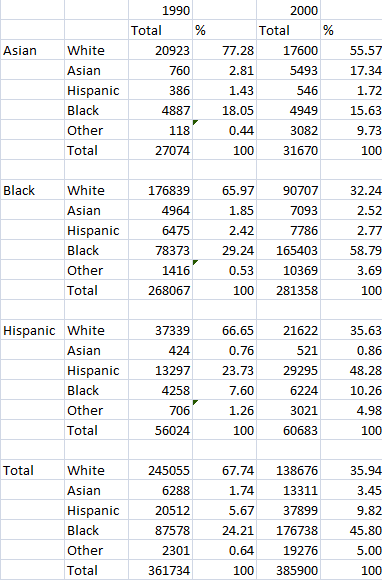 Move on to the 80s, the 1980 census used "Persons of Spanish Origin" instead of Hispanics. I'm assuming they're more or less equivalent, in which case blacks made up the bulk of the minority share in all areas where it increased by over 20 percentage points: 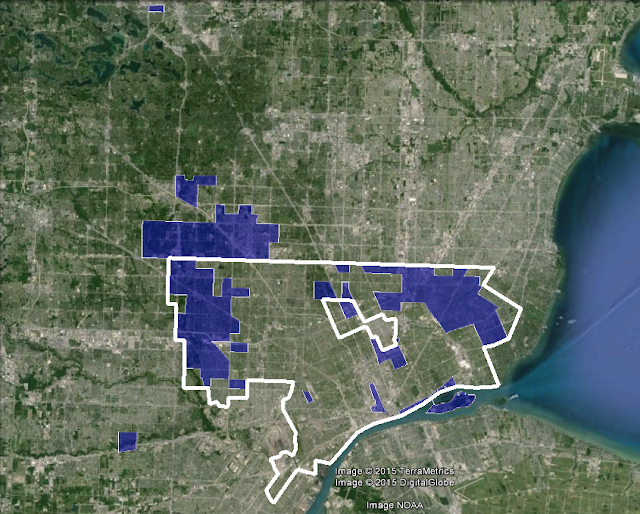 The numbers are somewhat similar to what they were in the 90s in terms of total population affected, although the 90s saw other ethnic groups play a bigger role, so the 80s had more neighbourhoods transitioning from white to black than the 90s. The changes were a bit faster too, and the areas affected lost a bit of population.

The 70s are tricky again. For the 80s onwards, the census distinguished between Hispanics of the various races. In the 1970 census however, it only states how many people of Spanish origin there are without stating the race of people of Spanish origin, and instead of giving the number of Non-Hispanic whites it gives one number for all whites (Hispanic/Spanish or not). 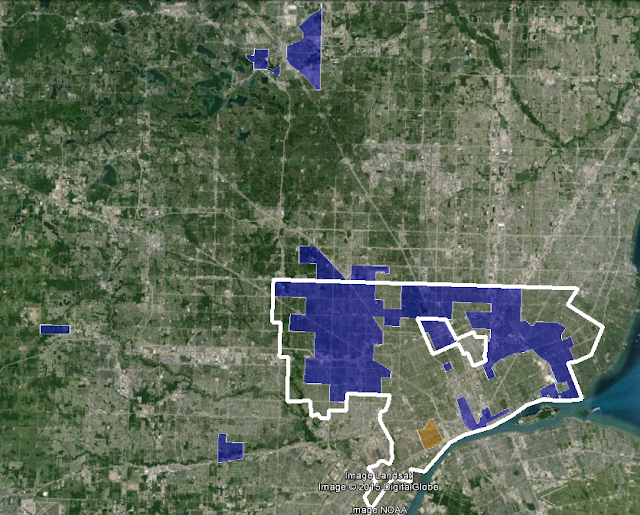 Large chunks of Detroit are affected, as well as Highland Park, Pontiac, and only a little in the other suburbs. For anyone wondering what's going on in that census tract in Plymouth Township (left of image), the vast majority of residents of that census tract are inmates. 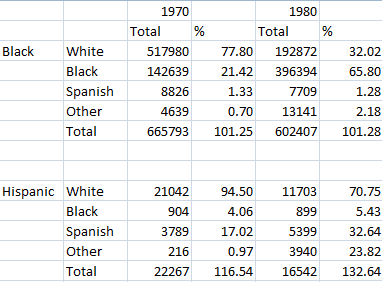 You can see an influx of people of "other" race and of Spanish origin in the Mexicantown area. 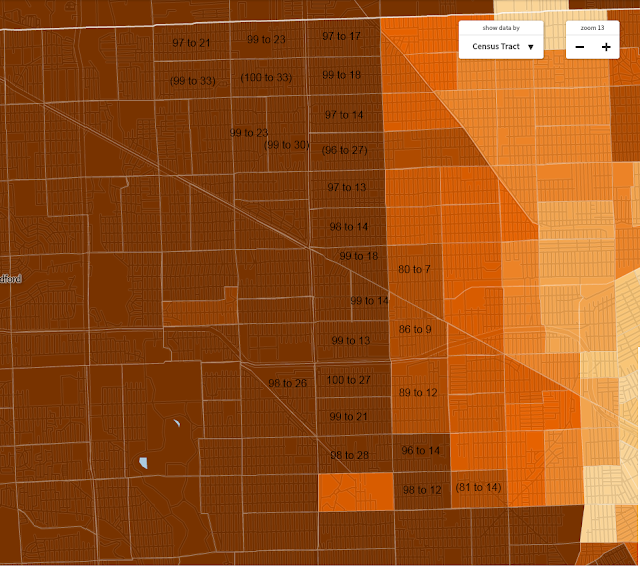 Going back further, to the 1960s, the pattern is about the same. 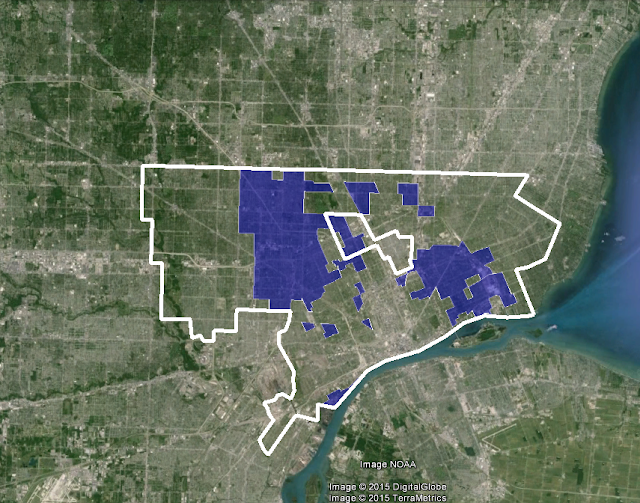 This is the part of NW Detroit (around Livernois to Meyers) that experienced the most intense white flight, again, a similar pattern to the 70s, just closer to the core. 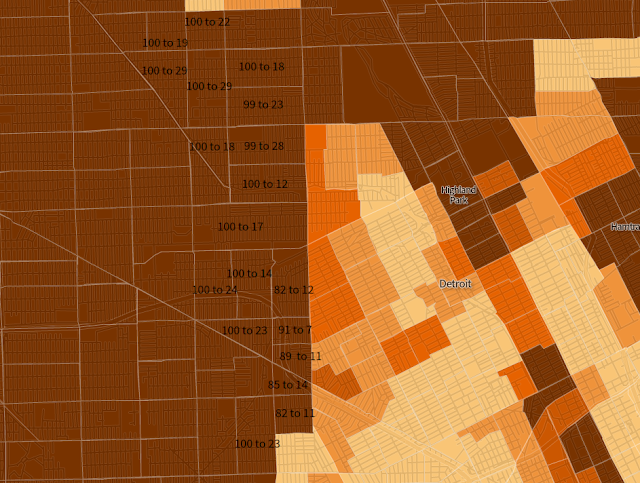 For people who say white flight only began after the 1967 riots, it might be a bit tricky to explain this data.

You'd have to explain:

-Why was white flight so intense in some areas (100% white to 12% white in the most extreme case) while other areas experienced no white flight at all? Large chunks of Detroit were still over 98% white in 1970, and even in 1980 there were 15 census tracts in Detroit that were over 95% white.
-How come white flight was just about as intense in the 60s as in the 70s when the 60s only includes 3 years that are post-1967?

It seems to me like white flight was already underway in several neighbourhoods before 1967, and it probably would have spread to other parts of Detroit without the riots, although the riots might have helped speed things up a little.
Posted by NickD at 02:39